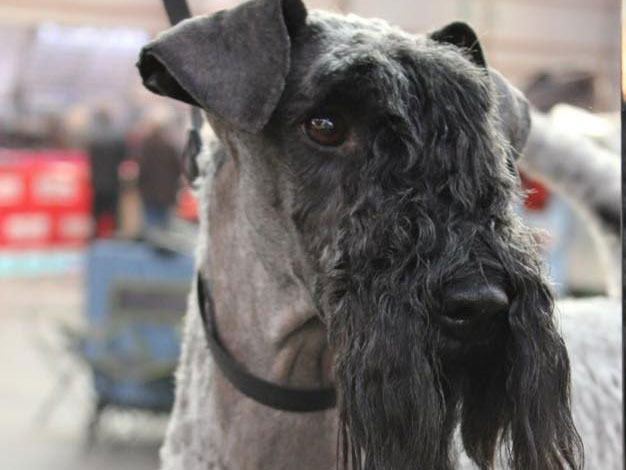 UTILIZATION : Used in the hard job of tackling otters in deep waters, to engage badger underground and hunt vermin. A good watch dog and loyal companion.
CLASSIFICATION F.C.I. : Group 3 Terriers.
Section 1 Large and medium sized Terriers.
Without working trial.
BRIEF HISTORICAL SUMMARY : Like the other Irish Terrier breeds it is assumed that the Kerry Blue has been in the country for centuries, but, once again, because of its humble origins as a rat catcher and all-round farm dog, there are few, if any references to the breed before the 20th century. The first  probable literary references to the Kerry Blue dates from 1847 the author describes a bluish slate coloured dog, marked with darker blotches and patches, and often with the tan about the legs and muzzle. This blackish-blue Irish terrier was supposed to be prevalent in Kerry but it has been developed in other counties as well. The blue didn’t make its first appearance on the show benches until  1913, and the Dublin Blue Terrier Club was formed in 1920. The Kerry Blue became quickly so popular as a sort of mascot for Irish patriots that there were actually four clubs promoting its interests for a short time, and between 1922 and 1924 these clubs sponsored no fewer than six shows and six field trials. By 1928 this impressive balanced terrier with its beautiful soft blue coat became popular worldwide and its reputation as an excellent working and companion dog agreed with the breed assessment as « well nigh perfect ».
GENERAL APPEARANCE : The typical Kerry Blue Terrier should be upstanding, well-knit and well proportionated, showing well developed muscular body with definite terrier style.
BEHAVIOUR / TEMPERAMENT : Terrier character throughout. The all-important factor-expression must be keen and alert.
HEAD : Showing plenty of hair. Dogs should be stronger in head and more muscular than bitches.
CRANIAL REGION :
Skull : Strong and well balanced.
Stop : Slight.
FACIAL REGION :
Nose : Black, nostrils large and wide.
Muzzle : The foreface should be of medium length.
Teeth : Teeth large even and white, scissor bite (level bite acceptable).
Jaws : Jaws strong and muscular (punishing jaws).
Mouth : Gums and roof dark.
Eyes : Dark or dark hazel, medium in size and well placed, keen in expression.
Ears : Thin and not large, carried in front or close to the sides of the head, in a forward position, again to express the keen, sharp terrier expression.
NECK : Well proportioned, well set on shoulders and moderately long.
BODY :
Back : Medium length, level.
Loin : Moderate in length.
Chest : Deep and of moderate width. Ribs well sprung.
TAIL : Thin, well placed and carried erect and gaily.
LIMBS
FOREQUARTERS :
Shoulders : Fine, sloping, well-knit.
Forelegs : Straight in front, bone good.
HINDQUARTERS : Hindlegs well set under dog.
Thighs : Muscular, well developed.
Hocks : Strong.
FEET : Compact, pads strong and rounded, toe nails black.
GAIT / MOVEMENT : Good coordination, with legs parallel, forelegs reaching out and powerful drive in the hindquarters. When the dog is moving the topline should remain level and the head and tail should be carried high.
COAT
SIZE AND WEIGHT :
Height at the withers :
Dogs : 18 – 19,5 inches (45,5 to 49,5 cm).
Bitches: 17,5 – 19 inches (44,5 to 48 cm).
Weight :
Dogs : 33 lbs to 40 lbs (15 to 18 kg).
Bitches : proportionately less.
FAULTS : Any departure from the foregoing points should be considered a fault and the seriousness with which the fault should be regarded should be in exact proportion to its degree and its effect upon the health and welfare of the dog.