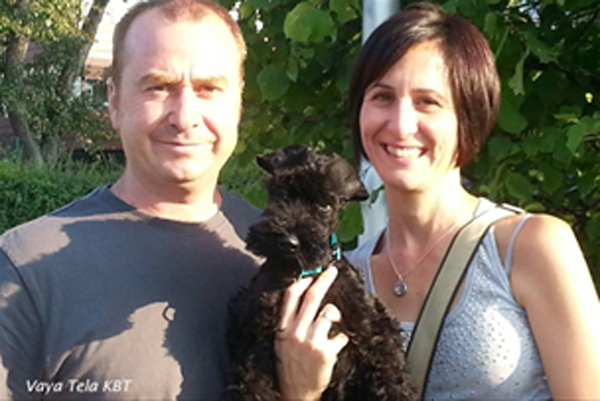 We are Marián, José Luis, Alba… Bronto, Cora, Oli, Enya and Owen…
And this is our history!

When we met,both we had a dog, Jose Luis had a Wire Fox Terrier (Dino) and I was a German shepherdog (Chico). Chico stayed at my parents home when Dino died we decided that we wanted another dog. Reading an article in a magazine, we saw the features of the Kerry Blue Terrier (does not pull hair, size, character, that is hypoallergenic, important detail because I have allergies to dogs), we decided that this was the breed that we wanted, so we started the job.

After calling several breeders, we found a litter that had “La Cadiera” kennel so we went to Avila to look the litter.

When we arrived one chubby ball came to us and I love him, but Jose Luis liked other puppy, at the end, studying the two dogs, we decided on the first puppy, the small ball, and we adquired our first Kerry Blue Multi Ch. Vaya Tela de la Cadiera” (Duncan), this is the reason that our breeder name is “Vaya Tela”. We bought Duncan with the sole intention of enjoying of our companion dog. We started to go to shows of Aragon by curiosity, to our surprise Duncan was consecutive BIS in 5th times in Aragon, this encouraged us. From here, we begin to fix it and get the championship in Spain, France, Gibraltar, Interra, International, the world dog show in Amsterdam finished 2nd in Open Class and 3rd in open class at Crufts 04.

At this time we thought about a couple for Duncan. When we returned from Crufts, we decided to adopt Uba with two and a half years old, a beautiful bitch with character problems. We never got that she liked the dog shows, but yes the sofa and she was a wonderful and excellent companion dog and the mother with Vaya Tela de la Cadiera of CH.”Vaya Tela Arion” (Nano), our third Kerry, who also won the championship of Aragon doing BIS in all dog shows from young class and he was  Spain Champion 09 and RBIS Special Terrier dog show, and other 3 marvellous kerries that they lived with their families in Andorra, Granada and Galicia.

When we changed to a house with land, we decided to repeat the litter of Duncan and Uba, but it wasn´t posible.

In April 2008, the WW&Multi Ch.Kerrydon Court Justine (Jus) came home, she was almost a year and She wanted to dominate all world… I thought we would go crazy, but with a little discipline she have been fitted perfectly into our lives and now she was Spain, Gibraltar Junior and Adult, France, International, Luxembourg champion and finally, She dominate the world, She was Best of Breed and World Winner Champion 2011!!! and We didn´t go to other whows with her. She cross the rainbow 10/01/2019 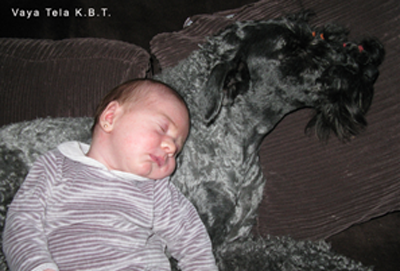 On January 5th 2012, our family grew with our little Alba,and she was coupled to our small four-legged.

As I said before, we live in a house with ground, we haven´t kennels, our kerrys  live at home because we like to enjoy them and the only way is to have them with us.

Each one is special, everyone has a personality and character,They are like a clowns and they always make you throw a smile.

In March and May 2015, when they was 15 years and a half, Duncan and Uva left us, our founders, we love this breed for them, they left us a big hole and we will continue to work with them. We never forget them.

As for the features, I must say, I could not believe that they don’t smell and not to pull hair and it is really true and of course I have no problem with my allergies and that I live daily with them. If it is true that they have character, like any dog, but with discipline you can accomplish anything, and indeed, our  kerrys live together.